“The compareTo() is a method that is supported by the java string class for string comparison. This method compares the string lexicographically, which means in alphabetic order. The comparison of the string depends on the Unicode value assigned to each string character. The return value of the compareTo() method is the integer value that can be positive, negative, or zero. The positive integer is obtained when the first-string characters are higher characters than the second-string characters. The negative integer is returned when the first string is lower than the second string using alphabetic order, and it returns zero if they are lexically equal.”

We are using the compareTo() method of Java in this particular example to demonstrate how this method compares the string in alphabetical order.

We have a main program inside the class “CompareToCase1”. Here, we have declared three variables which are titled “s1”, “s2,” and “s3”. The variables contain a string of words where “s1” and “s2” have the same string. The “s3” is initialized with a different string. Then, we invoked the compareTo() method, where we passed the “s2” and “s3” variables as an argument. The compareTo method compares these strings with the “s1” string and prints the results.

We have a “0” integer value obtained from the compareTo method as the string “s1,” and “s2” have the same content. On the other hand, we have got the negative value “-7” from the comparison of “s1” and “s3” because they are not the same, and “s3” comes after the “s1” according to alphabetical or dictionary order.

Now, we are checking the equivalence of the strings by using the compareTo method. For this, we have to use the conditional method in our program. 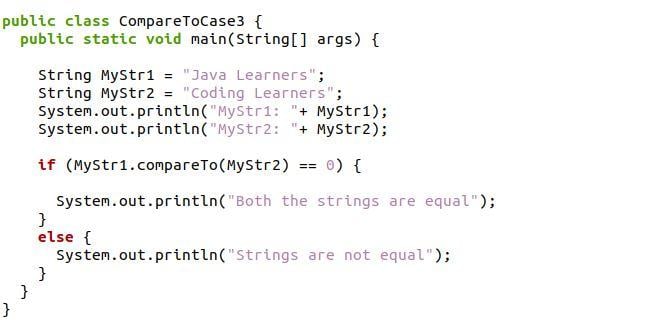 We have the main method declaration inside the “CompareToCase3” class. We have created two strings there which are defined as “MyStr1” and “MyStr2”. We have stored different strings in both variables. The strings can be displayed by the print method of java on the console. Then, we employed the if-else block. We have an “if” condition where we have provided the compareTo method. The “MyStr2” is used as a parameter inside the compareTo method and compared with the string “MyStr1”. If these strings are matched with each other, the results are “0,” and the “if” block statement will be executed. Otherwise, we have else block execution.

The string comparison results displayed the statement that strings are not equal on the console below, as we have provided the different strings.

Although the compareTo method of java performs the same for the comparison of the string that has a different length, let’s consider this statement for the below program. 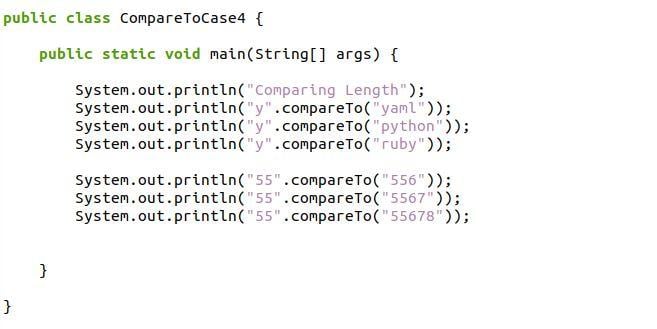 The different outcomes of the varied string lengths are displayed below.

We have a “CompareToCase5” class which drives the main program. Within the java main block, we have defined the “Str_Val1” variable, which holds the string. Then, we have defined another “Str_Val2” variable, which holds the “null” value. The strings are called for the comparison within the “system.out.println” method. The compareTo method is also employed there. We have compared the “Str_Val1” with the “Str_Val2”. The execution results will be shown on the console.

When these strings are compared, it raises an exception of “NullPointerException” output as the string used as a parameter inside the compareTo method has a null value.

Moreover, we have another exception case regarding the string compareTo method. The ClassCastException is raised when we have inconsistent types of objects for comparison. 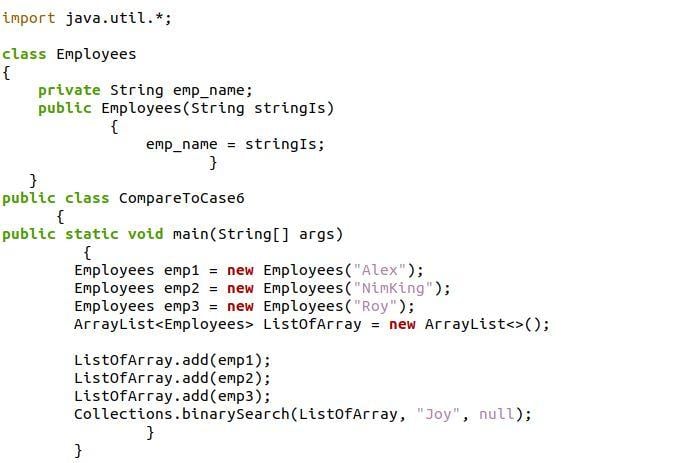 We have built a class as “Employees” where we have defined the “emp_Name” object and also called the constructor for “Employee” of the class. The “emp_name” is defined with the “StringIs” object called in the constructor. Then, we have the main method inside the “CompareToCase6” class. We have specified some employees’ names by calling the class “Employees”. We have added the employee’s name with the aid of the add method. After that, we have a binary search operation for a comparison of the employee names string with another string.

The execution of the above program meets except the ClassCastException, as the provided string is incompatible.